Posted on September 13, 2013 by discoverybicycletours

Made it to the top of Cadillac Mountain

This is a fun bit of information that just came in from tour leaders Bill and Cindy who were just leading the Coast of Maine tour. Apparently all 18 guests and the leaders enjoyed a ride up Cadillac Mountain (located in Acadia National Park) on our Discovery Bicycle Tours Coast of Maine tour.

At a wine and cheese gathering before dinner the follow calculations were made regarding the tour group’s success!

And 3 more at the summit!

Part of the tour group on a sunny day!

And now some confirmed facts…Cadillac Mountain, at 1,530 feet, is the tallest mountain on Mount Desert Island and is the highest point along the North Atlantic seaboard. From October 7 through March 6 of each year it is the first place to view a sunrise in the United States.

One more thing we must mention… 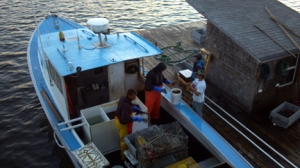 Bringing in the day’s catch!

Approximately 40 millions pounds (nearly 90 percent) of the nation’s lobster supply is caught off the coast of Maine, and Maine lobsters have won international fame for their flavor and contribution to the culinary world.

Fun times had by all!

That’s all folks! Have a great weekend!